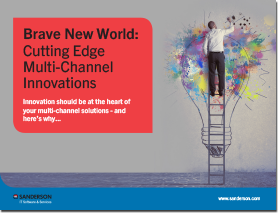 Innovation should be at the heart of your multi-channel solutions – and here's why...

Times have officially changed – while retailers have known for some time that a multi-channel approach is essential to expanding their businesses in the 21st Century, consumers are now expecting it too. According to a 2012 survey by Econsultancy, 40% of UK shoppers say it is important that they are able to buy from the same retailer across different channels.

While pricing remains a vital factor for standing out from competitors when it comes to multi-channel solutions, innovative ideas are essential too – something that the following retailers clearly understand.

It's an impressive achievement – a 157-year-old British company that has embraced digital so completely that it has been heralded as the world's most digitally competent brand two years in a row.

Burberry's dominance looks set to continue thanks to its innovative 2013 Autumn runway show  earlier this year, which formerly was only open to the glitterati and fashion industry luminaries. But this year Burberry shook things up by:

Multi-channel Innovation: Burberry is the master of multi-channel solutions, able to blend its bricks-and-mortar stores and digital operations into a unified 'one-vision' experience for its customers – wherever they are accessing the brand from.

Waterloo Station was brought to a virtual standstill on Valentine's Day in 2012 when travellers were invited to download an app and point their smartphones at an M&S billboard featuring a model in lingerie. On the phone's screen, the billboard sprang into life with the model showing off different sets of lingerie while offering viewers the ability to order their preferred bedroom wear.

See it in action here.

Meanwhile, crowds annually amass outside fashion e-tailer Net-A-Porter's 'Window Shop' in London to point their mobile devices at its fake bricks-and-mortar store that features posters of its products in the 'window'.

Pointing a mobile device at an individual poster brings up a video of the model wearing the selected product on the mobile’s screen with prices and links. As well as being a clever use of physical space, Net-A-Porter’s innovative approach means that the store effectively never 'closes' so people can buy at any time of the day or night while the promotion is running.

See it in action here.

The project has proven to be so successful that it’s been rolled out across the world to cities including Sydney, Munich, Paris and New York.

Multi-channel Innovation: Clever use of visual technology that snares customer curiosity – and the press' attention – with targeted advertising featuring the option to immediately 'click and order’.

Trialling began in May this year of a mobile app that customers can use to scan each product they pick off the shelf before heading to an automated checkout. The benefits? Customers save time while being able to monitor exactly what they are spending.

The new app also has the potential to take loyalty cards to the next level by offering both retailers and customers several advantages:

Learn from the best: download your free eGuide now: Multi-channel leaders, we salute you: what you can learn from John Lewis